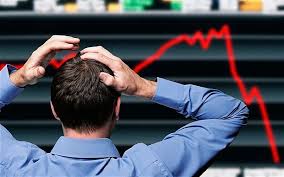 Something odd happened to me yesterday morning. At 9am I was at the gym, doing my thing on the elliptical trainer. As I flipped channels, I saw the same thing again and again. With varying levels of hysteria, every station had a talking head describing the carnage occurring in the stock market. At one point the Dow Jones Industrial Average was down over 1,000 points or 7%!

Once upon a time, most of my adult life, I would have been consumed by this event. It would have likely dominated my day, week, month, etc. This morning, I found myself thinking “big deal” and wondering why I had spent all of those years actually caring.

I spent twenty years in finance, the last nine with a large hedge fund. I remember the currency crisis of 1998 when I worked weekends for months straight just to figure out what our positions actually were, debating in 2001 who should go to work in the shadows of the World Trade Center the day AFTER the worst terrorist attack in US history, most of all I remember spending a beautiful weekend in Venice in my hotel room on an endless conference call during September of 2008 while my family saw the city.

You see finance is all consuming to those who are involved. Its not just the money, it’s the action, the importance of what people in finance think that they do. We thought that every action we took had broad and deep consequences. So at a time like this we would be obsessing about what we should sell, what we should buy. What can we sell? Who wants to take their money out? How can we convince them not to? Will the banks call our loans? What will the FED do?????

Now I could speculate about why we are having this sell off. It’s a marginally interesting topic and I still do have an investment account or two. But the reality is that there are too may others wasting space on the topic, I am not nearly as well informed as I once was, and the cynical side of me is pretty convinced that this is just another example of market players bullying the FED into keeping rates low. For those of you who don’t realize it, that is good for asset owners, not the rest of us, especially those on fixed incomes.

In the three plus years since my departure from the world of finance, I have learned many things. People in finance are smart, hard working, and focused. Of course they aren’t the only ones. In every walk of life I meet people who share those attributes. Many of them are involved in matters much more pressing than the price of a share of Apple or how to sell a basket of loans. They work in environments that are much more complicated and have diverse constituents with vastly different incentives.

It’s why I ultimately turn off the talking heads, finish my workout and head off to work on building a social venture that hopefully will make a difference.